Whether its for your business, or your home, having a security system that incorporates cameras is almost always a good idea. When that system is properly designed, it can help you deter criminals, and give you some valuable information in case of a theft or an act of vandalism. However, not everyone can afford a good system, and not everyone thinks it’s a worthy investment.

Many users see an alternative in a fake security camera. They look just like the real thing, only they have no electronics and no recording sensor inside them. They won’t record video, or take pictures, but they might help by giving thieves the impression that the location is under surveillance. They have their pros and cons, but overall are great. There are many security providers that recommend this, and there are good reasons for that. They’re also extremely easy to install, as you don’t have any configuration to do or wires to route.

Even though it’s easy to recognize the need for one, it is actually much harder to figure out which one to get. There are plenty, and at various price points, they offer different advantages. However, we’re here to help with this list of the best fake security cameras in the market. Without any high cost you could get this device to deter any robbery, theft and vandalism. This has a flashing light that continually flashes making it known to the intruder as a system with a high-tech surveillance system. This fake bullet camera is a very great way to give the illusion to any burglars, or intruders that the property is being watched. It is best for residential and commercial use and also both indoors and outdoors. 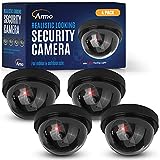 Both the WALI and the ZOSI above are bullet-style cameras. However, they’re much easier to spot as fakes if you know what you’re looking for. Enter the ARMO dome fake camera. Simple, black, no logos, no wires, no fuss.

If you think that you’d have a better success rate with a dome camera, you’ll be hard pressed to find a better one than the ARMO.

Another option by ARMO, this is a variant of their dome camera. A regular dome camera actually looks like half a dome, making it limited in terms of where you could mount it. For example, you’ll need enough room on the wall or ceiling you’re aiming for if you want it to fit. 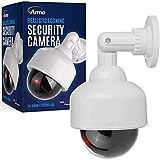 At the end of the day, as we said, if you’re limited with room and want a dome system, this is the one to get. If not, you might want to give the other options on our list a chance.

Last but not least, we have this extremely budget oriented 2 pack of fake security cameras by IDAODAN. This is a regular bullet style CCTV fake, but it’s built really well.

All things considered, this is not the best fake CCTV system. However, it is extremely cheap, and looks fairly real. If you’re on a very very limited budget, you might want to take a look at it. But if you’re not, and can afford to spend a bit more, by all means get something else from our list – you won’t regret it.

Who should get a real CCTV system, and who will be fine with a fake one? We’ll start with the cold, honest truth – a CCTV system is expensive. Especially if you’re looking at a reputable brand, one that’ll give you cloud storage and advanced functionalities, it can easily go into the hundreds for a setup with multiple cameras. On the other hand, a fake system costs a fraction of that price. But, a fake system just won’t cut it for everyone.

There are situations where you’ll be glad you invested your money in a real system, or regret buying a fake one. And, there are others when there’s simply no need for a real system.

To begin with, if you need a system for your home, consider the neighborhood and the things you have in your home. Sure, having your home broken in, even if nothing’s been stolen, can be a terrifying experience. However, if you don’t have any valuables in your home, or if it’s just a weekend house, spending that much money on a real CCTV system might not be the best call. On the other hand, if you live in a neighborhood that has a lot of burglaries, or you have valuables you’d rather not have stolen, you should absolutely invest in a genuine system. That way, you’ll sleep better at night.

On the other hand, if you’re looking at it for a business, things are a bit different. When you’re running a business, chances are it’s surrounded by other businesses, which very likely have a surveillance system in place. If this is the case, you can feel free to put fake cameras, at least on the outside. Even if something does happen, you can usually rely on your neighbors’ footage. On the inside, though, it depends on what your business is. If you’re selling something, you’ll want a real system. Even though things are commonly insured, it won’t do any harm to be safe.

A few tips on making sure you’re using it right The first thing to know is that an experienced criminal might know the difference between your fake security camera, and a real one. The two most obvious giveaways will be any overdone flashing red lights, and wires that are missing. Many  will have a red light that is meant to attract attention to the camera, and consequentially scare off potential thieves.

However, with a real camera, this light is the one that let’s a technician know there’s power to the camera, and is found on the back, luckily you can dissable this light on most fake cams, its a trade off because the light does scare away less experienced theives but tips off professionals, so you must decide which one your more worried about.

The other thing is that even the best fake security camera doesn’t have any electronics inside, and hence requires no wires. If you have a fake  with motion detector hanging from your ceiling, but it isn’t connected to anything, that’s an obvious tell. In order to not make it that easy, you could try and have some cables going to the device.

Another thing worth mentioning is a common mistake that many people do. In order to throw potential thieves off balance, people tend to mix fake security cameras and real ones in the same system. This is a mistake for one simple reason – a fake camera, when put next to a real one, is really easy to spot. Even someone who isn’t that experienced will notice, let alone a professional. Once they see which parts are being monitored, and which aren’t, things are much easier for them. If you’re making a system, make sure all cameras are identical – either real, or fake.

Be aware of the potential legal implications Both business and homeowners have been sued for using even the most realistic fake security camera. You might be wondering why, but it’s actually really simple. Let’s say there are fake cameras in your business’ parking lot. An employee might leave their car, or valuables, within the view of your camera, not knowing that it’s a fake one.

If the car, or valuables, get stolen, or the employee is attacked, they might ask you for the video. When they find out that you haven’t actually recorded anything, they can claim that the “camera” provided a false sense of security, leading them to believe they’re in an area that is secure and under surveillance.

If you’re running a business, you have cameras for the business’ protection, and you trust your employees, it might be a good idea to let them know that the cameras they’re seeing are fake. That way, you aren’t deceiving them in any way, and they’ll know not to leave any valuables or anything similar in a place that’s “under surveillance”.

How do you make the right choice when buying? To begin with, try to stay away from a cheap plastic housing case. Even the cheapest real security camera looks more expensive than it is, and this can easily give away that it’s a fake. If you’re going for a plastic made camera, make sure you get something that uses a bit more expensive plastic. Real CCTV cameras do that as well, and this makes fakes much more difficult to distinguish.

Keep The LED Off

Second, in order of importance, don’t get a fake security camera with motion detector and LED light. A fake motion detector is very easy to recognize, as a thief can easily see if the camera moves randomly, or is actually really motion activated. Regarding the LED we discussed how experienced thieves know LED lights are only present on the back of real cameras to show power. The good thing is that, even though all of the cameras on our list have one, they all require batteries for it to work.

We also mentioned you should have at least two cables in the back. With a real camera, one of them would be for power, and the second one would transmit the video feed to either a computer, receiver, or external storage. And, don’t just let those cables hang – try to make them look like they’re actually going somewhere, such as inside a wall, or behind a large object that could house the receiver. Some of the options on our list actually have one cable coming out of the “camera” and into the bracket, so things are made a bit easier.

Last but not least, we have logos and lettering. A good real security camera won’t have any company logos and printing from neither the brand that made it, or the business that uses it. However, it will have lettering on the lens in the front. This makes the lens look authentic, and it’s easier to believe it’s real. If you can get one that has these things taken care of, you should be good to go. The stickers ae a minor thing, and chances are that even if there are some discreet logos on the camera, they’ll be extremely difficult to spot in the dark, making things hard for a potential criminal. If you think that a system with fake security cameras is all it takes to let you sleep peacefully at night, by all means go for it. However, make sure you make smart decisions, not rushed ones. If you read through this far, you already know how easily an experienced thief can spot your fake camera, and what precautions you can take to ensure it’s as difficult as possible.

You also know what to keep an eye out for when shopping – things such as that notorious red LED light that you see in the movies can easily tell the camera is fake, so stay away from them, or find a way to cover them up. Make sure you have some cables coming out, follow the other tips and tricks we mentioned, and you should be good to go. Even an experienced criminal will struggle when in a situation like that. 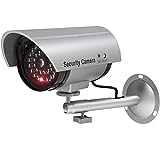 The WALI Bullet system comes very cheap, even if you get a 2 pack or a 4 pack. It does look like a real security camera, and if you set it up carefully, it can easily fool even an experienced criminal.