If you tend to watch spy movies with your kids rather often, there’s a pretty big chance that they’ve taken a look at some of the gadgets said spies use, and asked whether or not they could get them. Now, they often do this for things that would be outright dangerous for them, and sometimes even not available to the general public. But what if you could give them something that’s still somewhat of a spy gadget, but can pose absolutely no harm?

Well, you can – an invisible ink spy pen. While this is something an adult would easily understand, it’s going to be a very interesting concept for a kid who wants to feel like a spy. Whether they’ll use it to write secret messages to their siblings, or as a communication method with their friends at school, it’s undoubtedly a cool gift to get them.

With that being said, how would you choose which one to go for? There are quite a lot of options out there, and not all of them are worth it. Well, below we’ve got a list of four options, and then we’ll discuss how an invisible ink spy pen works, so you can be sure they’re completely harmless. Without wasting any more of your time, let’s go.

If you are looking to buy a spy pen, we suggest checking out the best spy pen and the best tactical spy pens in the market nowadays!

Comes in a pack of 12
Built-in UV Light

We’re kicking things off with our top pick, which is the SyPen Invisible Ink Pen Marker. To be more specific, this is a set of twelve markers, all of which have invisible ink and a UV light to reveal the ink. You’ll get two pens in each of the six colors in the pack, so if you have two kids, they won’t have to argue about who would get the green pen. 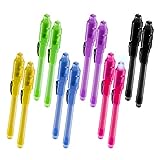 The pens themselves are completely safe, and there’s no problem even if your kids want to write on random surfaces, such as their little brother’s hands. The ink is easily washable, and you can clean any surface they decide to mess up, rather easily. It’s also harmless and odorless, so you don’t have to worry about any kind of harm happening with them. In the cap is the UV light, which you point at the message in order for it to appear. This is where you should be careful, because a toddler might get their hands on the tiny batteries.

If you’re looking for a good overall set of invisible ink pens, that come in multiple colors, and that work really well, this is the one you should go for.

If you don’t think you’ll need to many invisible ink spy pens, a four pack could be perfect, and it will also save you a bit of money, too. This one by FLYONME is a great option, and one you should definitely take a look at. 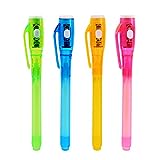 You get four pens with four different colors, and a UV light that works a bit better than most of the competition.

To begin with, the ink is completely harmless. No odor, easily washable, and it works on just about any surface you can think of. It’s one of the best you can get. And the UV light is much improved. With most of the competition, you get UV light in the cap, and you have to hold a button to keep the light on, which might be tricky for a kid. Here, however, it’s a simple on/off switch that works admirably.

If four pens are enough for you, the FLYONME invisible ink spy pen is the one you pick.

What all the other options have in common is that the ink writes in a single color. But what if you want more colorful invisible ink? Maybe you want to write a few messages on top of each other, to make them even more covert? In that case, the Sherlock Hones Invisible Pens is the kit to go for. 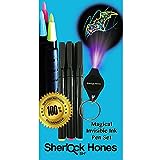 Now, you might be thinking that the price is a bit high for a pack of three pens and a UV light. But actually, when you consider you get a red, blue and pink invisible ink, in some compact pens, it’s not a bad price. The ink is non-toxic, long lasting, and best of all, waterproof. This is great for permanent uses, but you should note that you’ll want to be careful with kids – you might not be able to wash it all that easily. If this is a potential concern for you, get another option.

The UV light comes in the shape of a keychain, and it works pretty well. It eliminates the need for a bulky cap with batteries a toddler can swallow, which is pretty nice. Overall, this is the best colorful option.

While all the other options on our list were excellent by themselves, they were all just a pack of pens. If you want a complete set that comes with pens and writing notebooks that will add to that “spy” feeling, the HeroFiber kit is the one to go for. 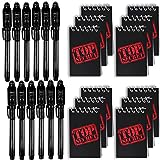 Within the kit, you’ll get twelve black pens, all of them identical so there’s no arguing about who got the better pen at the party. Alongside with that, you get twelve mini notepads with “TOP SECRET” stamped on the front. They’re excellent for use alongside the pens, and are a pretty compact option.

The pens themselves work really well. As you would expect with a kid-friendly invisible ink spy pen, the ink itself is completely safe, and will work on just about any kind of paper. You should be careful with it, however, since you might have a bit of trouble when you need to wash it, especially if your kids mess up a surface you don’t want messed up. If, however, you don’t mind supervising the use of the HeroFiber kit, it’s definitely a good choice.

How Do They Work?

While many people opt for a DIY alternative such as vinegar or lemon juice, this is an option that can get messy. And this is especially true if you need this for small kids, because chances are they’ll make a mess that takes hours to clean. Therefore, an invisible ink spy pen is a good alternative.

An UV pen, or UV marker, has fluorescent, yet transparent marks, which you can only see under ultraviolet light. The body is made of plastic usually, which is just like a regular pen. Inside, however, the ink is completely different. It contains a fluorescent that’s usually derived from things that glow when you expose them to ultraviolet light. This usually includes things such as diluted laundry detergent, as well as tonic water and vitamin B-12, which are dissolved in vinegar. (1)

Whether you get opaque, semi-opaque, or completely translucent UV ink, all variants will come with acrylic monomers that have both a diluent, and a photoinitiator. The photoinitiator is what will respond to the UV radiation and absorb the light, which is basically what makes everything work.

First. you’ll need to write the message, and then you use the UV light to read it. When you turn on the UV light, it emits light that is near-ultraviolet. This is also known as black light, and at 380nm, it is just outside the visible spectrum. This is a very narrow wavelength, which falls within a broader band than a regular fluorescent black light. And this is exactly why these are friendly even for kids, because they’re completely safe. There’s no damage to the eyes possible, there’s no risk of skin cancer, nothing. The only thing that happens is that black light falls upon the ink, makes it fluoresce and emit visible light, therefore making the message readable for the human eye.

Fluorescence is basically caused by a simple conversion of energy. The invisible UV light falls on the surface, it is absorbed, and it is re-emitted as light radiation, which is visible. The fact that the UV-visible ink has electrons that absorb the energy is what allows this to happen.

It’s interesting to know that photocopiers have a head which does contain UV elements, and in some situations, people can use photocopiers to develop a message that has been written in UV-visible ink.

We’re well aware that a lot of parents will be skeptical to get a UV light and give it to their kids to play with. However, any of the invisible ink spy pen models we spoke about are completely safe, and you have nothing to worry about.

If you want a way for your kids to feel like spies for a moment, and something that will allow them to write secret messages and pass them on to their friends, any of the options above are an excellent way to do so.