If you are looking to buy the best wired spy camera, worry not because your search ends here. We have sorted out and picked the top 3 models for you after hours of research and personally testing them. Wired spy cameras are amazing tools for discreet recordings because of their compact subtle design. It’s difficult for someone to notice these tiny pieces of technology, let alone suspect them to be a camera. The best part, however, is that most of these can be hardwired into everyday objects like coat buttons and glasses for events, social gatherings, important meetings, etc. These wired spy cameras also come in other forms where they are integrated inside household furniture like photo frames, clocks, and even wall mirrors.

In this article, we will cover the following: 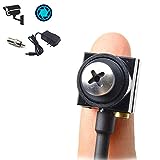 TPEKKA is among the best spy cams that is small enough to be held with your fingertips.

TPEKKA looks much like an earphone bud, but the tiny hole at the end of the wire records videos instead of outputting sound.

The reason we’ve put this at the start of our list is that it’s the least expensive spy camera in the market, so affordable that literally, anybody can buy it. However, don’t worry, the quality is not compromised. This spy webcam features a basic range of features to fulfill its role as a camera.

It has an integrated CMOS image sensing unit that can record videos in 1000TVL HD quality. The images and videos produced are very clear so quality is not an issue. The camera lens has a vision of 90 degrees, which is ideal for indoor monitoring if you want to keep an eye on a caretaker in your house, your pet, or someone else. It can also be used in dormitories, hospital wards, and other places. (1) 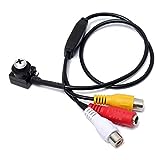 The Vanxse CCTV Mini Spy Security Camera is also amongst the most affordable spy cams in the world with highly useful features that can be of benefit to anybody.

Like any other mini spy camera, the Vanxse CCTV Mini Spy Security Camera is one of the best spy camera, considering its little size, budget-friendly cost, and simplicity. It looks much like a routine power cable but one end of it has an undetectably tiny camera.

It can record videos in 1000TVL quality in high definition with a CCTV wide-angle lens view of 90 degrees. Regardless of the time of day, this cam can record everything for you. It also has built-in 8 infrared LED lights that give this camera night vision and allow it to record in the dark. (2)

To set it up, you simply need to attach it to a DC 12V 1A power supply and let it do the rest for you. 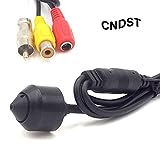 CNDST Mini Spy Pinhole Security Camera is another terrific spy cam that also looks like a power cable with a little f3.6 mm pinhole screw lens at the end of it.

The cam size is approximately 15 x 15mm, making it so small that it’s practically impossible to suspect it as a camera. Anyone passing by is more than likely to mistake it for a typical cable. It is also incredibly light, weighing at merely 0.3 ounces.

This spy camera records videos in 1200TVL quality with a 90-degree wide-angle lens. All videos are in HD resolution with crystal-clear picture quality.

For set up, the cam just needs to be connected to a DC 12V 1A Power Adapter for 24/7 monitoring. If in case you are not sure about what you’re doing, the purchase comes along with an instructions manual to guide you.

Getting started with Wired Spy Camera

The “definition” of a wired camera is a camera that requires a wire, or a cable, to bring both power supply, and video transmission. Where many people make a mistake is thinking that this always leaves unsightly cables hanging around your home. Even though this is sometimes the case, if you plan things out well, this can be prevented.

There’s actually nothing stopping you from guiding the cables through the wall, thus hiding them out of sight. However, this is close to impossible to do when you have a camera that isn’t attached to a wall, such as a bookshelf nanny cam. If you want to be safe when trying to figure out whether to go wired or not, consider that you’ll need to do something about those cables with a wired camera. Wires that need to be taken care of remain the biggest downside to a wired mini spy camera.

If you can take care of the wires, though, there are numerous advantages. For one, power and video transmission is taken care of.

Power is easy – all you need to do is route the power cable to the nearest outlet, or connect it to your home installation if you’d rather keep things clean.

Video transmission depends on the type of camera you have. Even though some cameras come with built-in storage and there’s no cable for video, this is a feature best saved for wireless cameras. You’re running wires anyways – why not run one to your router or DVR? It will most likely be just an ethernet cable, so it’s easy to run.

A wired camera also isn’t limited to the storage in the camera, or the SD card. You can just add a large hard drive to your DVR and extend the recording time. And, if you want to take a look at the video that’s recorded in its full quality, you just need the DVR. With a wireless camera, you’ll most likely need to get the SD card out, as any video transferred wirelessly will be compressed for speed of transfer.

And, last but not least, there is no interference from nearby devices. Wireless cameras, especially cheaper ones, use frequencies that might also be used by other devices in your home. Two devices transmitting data on the same frequency can be a problem.

A wireless mini spy camera, on the other hand, doesn’t require any wires. Video transmission is taken care of wirelessly, usually through your home’s Wi-Fi network, and power comes from a built-in battery. This makes them extremely convenient for places and situations where you just can’t afford to have cables visible, and there’s no way to guide them through a wall.

If you want to put the camera somewhere on a shelf, or on a wall you can’t afford to destroy for cable management, you want a wireless camera. However, they actually aren’t that great for much else.

To begin with, video almost always has some sort of compression when you’re transferring it wirelessly. Therefore, the only way to actually see the video in full quality is if your wireless mini spy camera has built-in storage, or an SD card. However, you’d have to connect to it via a cable to see the video.

Another thing is that the battery on a wireless camera doesn’t always last long. You could usually get a few hours of continuous recording, but you’ll need to recharge it afterwards. A workaround would be to keep it connected to a power source continuously, but that somewhat defeats the purpose of “wireless”, doesn’t it?

I would understand if you’re a bit confused at this point. Yes, the truth is that there isn’t a clear winner between wired and wireless. Sure, technology is going wireless, rapidly, but we just aren’t there yet. There are still situations where you just need a cable, in one way or another. Such is the case with mini spy cameras in some circumstances.

The general recommendation would be, if you can afford to route the cables through a wall, or you just don’t care about them being visible, a wired camera is the way to go.

Better quality, no worries about charging or emptying the storage, it’s a “set it and forget it” solution.

However, if you need a camera in a location where you can’t have cables visible, such as a hidden camera, you’ll be much better off with a wireless one. Sure, you’ll need to check up on it daily, or every two days, but that might be a worthy compromise.

When you wish to record and keep track of activities in a place, whether a company or in your home, a wired spy camera is the most sensible option in such a situation. Wired spy cameras are disguisable as a range of everyday items and can connect to any basic DVR devices on their own or as part of a bigger system. These hidden cameras are capable of recording 24/7 as long as they are connected to a power supply. This is great if you want regular surveillance. (3)

A wired hidden camera is a cost-effective and easy option for when you want to monitor something on a budget. Body-worn hardwired spy cameras are usually built inside smaller sized body gear, for instance, glasses, hats, ties, and buttons for t-shirts or coats among others. Portable hardwired covert cams are wired to an external DVR where the recording is kept. This hidden body-worn, portable spy cameras are an ideal choice for “on the move” video recording because of their undetectable disguise.

These cameras are designed to be compact and user-friendly. Developed to operate on reduced power intake, many models also come with a battery that keeps charging while they are functioning. In other words, it can become a wireless camera too, any time you want. Except that with wired spy cameras, the deal is much cheaper than what you would get if you had bought a wireless one.

Moreover, with easy storage on SD cards with a lot of space capacity, the recording can be quickly accessed without the need for an external system.

Some pieces of technology are still better in their wired versions than the wireless ones. Spy cameras are no different. They just have a charm of their own. Not only do you get a more reliable connection, but these cameras also make it possible to survey an area 24/7. Top it up with their incredibly subtle and compact designs and the possibility of integrating them inside everyday objects and body gear.

With a wired spy camera, what you get is an ultimate combination of undetectable disguise, double productivity, and HD performance.

You may also check Fredi Spy Camera and some spy camera instructions that we’re sure will help you. Until next time!